Win
Usually ships in 1-2 business days.
Availability: In stock
As low as $185.00
Overview

Announcing the Blackmagic MultiView 4 HD, a new multi viewer that lets customers monitor 4 completely independent SDI video sources on a single display. Customers can monitor any combination of SD and HD formats and frame rates at the same time. Blackmagic MultiView 4 HD features both SDI and HDMI outputs so it can be used with both professional SDI broadcast displays or big screen consumer HD televisions.

Blackmagic MultiView 4 HD includes four completely independent multi rate 3G-SDI inputs that are compatible with existing SD and HD equipment, including Level A and B devices. All inputs feature automatic frame re-synchronization, so customers can mix and match any combination of video standards and frame rates, including referenced or non-referenced NTSC, PAL, 720p, 1080i and 1080p60 frames per second, all on the same display at the same time.

With Blackmagic MultiView 4 HD, customers no longer have to connect multiple monitors, dozens of cables or run extra power to view all of their sources. They simply plug in cameras, decks, switchers, routers and feeds into the SDI connections on Blackmagic MultiView 4 HD and can see everything on a single HD display. That means theres less equipment to carry around and set up.

Blackmagic MultiView 4 HD features both HDMI and 3G-SDI outputs so customers can connect to either a professional SDI broadcast monitor or a low cost big screen HDMI television. When combined with an HDMI television, Blackmagic MultiView 4 HD gives customers the worlds most affordable professional multiview solution, making it perfect for use in control rooms, outside broadcast trucks, or on location shooting at live events.

Designed to be plug and play, connected sources will instantly be displayed in a standard 2x2 grid layout. Customers can use the mini switches to turn on audio meters, choose which audio to output, as well as create custom labels, and more.

The new Blackmagic MultiView 4 HD is exciting because there has never been a more professional multiview solution with features such as on screen labels and audio meters at this affordable price,' said Grant Petty, CEO, Blackmagic Design. Its like having 4 completely independent broadcast monitors on a single display. Customers can use it to view mixed video formats with different frame rates at the same time on a single screen so its very flexible!'

On all SDI outputs, auto switching between standard definition or high definition.

Auto detection of SD or HD.

YUV or RGB for inputs, YUV for outputs.

Automatically selects between SD-SDI and HD-SDI on each input so that each input can be running a different television standard. 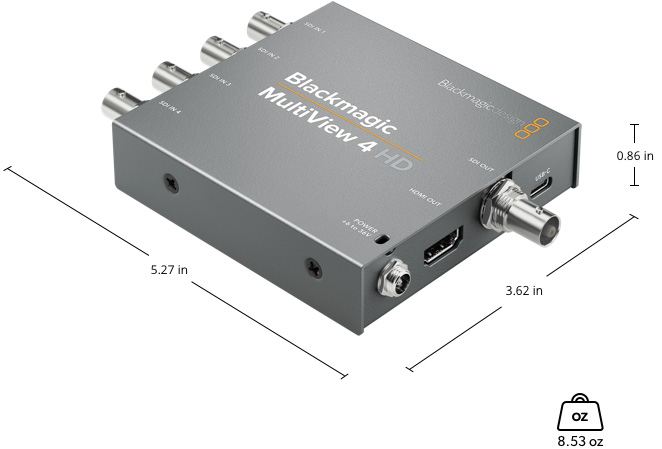